Pumpkin pie not your thing? Struggling to find a gluten-free alternative to your favorite Thanksgiving dessert? Well I have got the perfect treat for you!

This cinnamon sugar pumpkin loaf is super moist (I hate that word, but it’s honestly the best way to describe it) with a crunchy, cinnamon sugar topping! Anyone had Starbuck’s coffee cake? This is similar, but lower sugar and fat and PUMPKIN-FLAVORED.

It’s also healthy enough to be considered breakfast, which is always an added bonus. 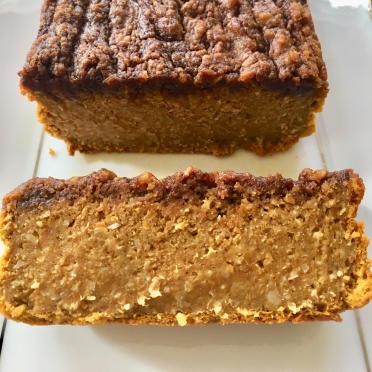 Spoon cinnamon brown sugar mixture on top of the wet mix in the loaf pan, making swirl like motions.

Bake for ~45-60 minutes, sticking a toothpick in to ensure it is cooked through!